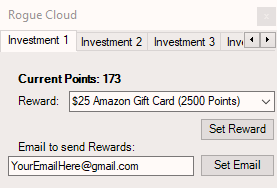 Rogue Cloud will automatically setup a server and earn money on your server for you! All you need to do is have VIP and buy Cloud Instances in the Sub Shop! After you do so you can use this program to tell each instance what Reward you would like to get when it gathers enough points! It's that simple! Let Rogue-Labs manage everything automatically while you get the rewards!